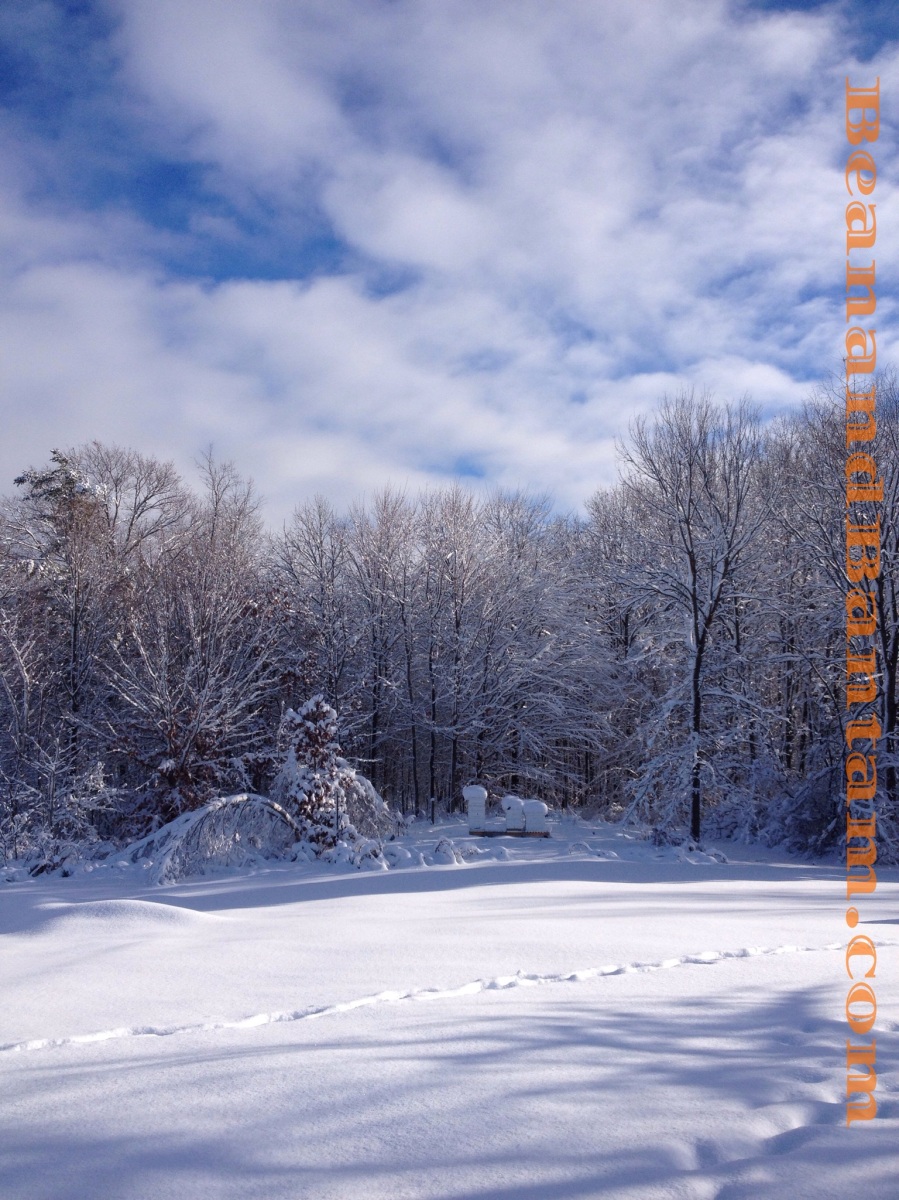 Last winter was my first winter, as a new bee keeper, trying to bring bees through to spring.  We had many nights with temperatures well below zero, and while I had tucked them in that fall for the winter as best I could (the methods for which will be in another post), the anticipation and worry of them surviving or dying was such that there were times that I would strap on snow shoes and walk out to the hive, lean down and put my ear to the top entrance, and then hold my breath while I listened for signs of bee life.  I could never hear anything in daylight, but at night the world seemed quieter, and I often heard the sound of clustered bees within the hive, giving off a hum or buzz when I leaned in and listened.  It seemed like a miracle, every time, to hear that quiet buzz.

We have neighbors that can see our house and I sometimes wondered if they ever saw me tramping out there by flashlight, leaning over or crouching in the snow to listen hard for bees in the dark, under the stars, in the cold, to see if I could hear whether they were still pulling through the winter.  I thought that probably not too many people in this world visit their bee hives at night, but that quiet hum under winter starlight was always a source of wonder and joy.

And then, I found that I wasn’t first one to do so.  In searching through the vast internet, I found an ancestor of mine also kept bees and also visited his hives at night:

Excerpt of a letter from General G. W. Van Schaick to Simon De Witt Esq. Lansingburg, New York on May 23,1816, regarding a new bee keeping pest (at the time) known as the wax moth larvae titled “Observations additional on the Worm which of late has proved so destructive to Bees” and published in the Transactions of the Society for the Promotion of Useful Arts in the State of New York, Vol. IV, Part 1, printed by Websters & Skinners, Albany, New York, 1816.

So I guess you could say it runs in the family… bee keeping, or a certain strangeness.

Bringing bees through the winter in New England is never a certain thing.   While clustered in the winter hive, they can survive brutally cold sub-zero temperatures if the hive ventilation is just right, and if they have enough food stored, and enough moderate temperature breaks to be able to move from an area without food to one with stores.  Moisture in the hive (generated by their insect breath) will kill them if it condenses overhead and falls back upon them, so an insulated roof is recommended, and I use a top entrance at the rear of the hive to remove excess moisture, in addition to the entrance at the bottom front of the hive.

10 thoughts on “Listening to Bees in Winter”